The World Of Norm (May Contain Nuts) by Jonathan Meres

Diary Of A Wimpy Kid, Tom Gates, Dork Diaries, and now The World Of Norm. This book by Jonathan Meres has recently been nominated for the Red House Children's Award, alongside Gangsta Granny and Operation Eiffel Tower. The school Book Club have just borrowed six copies of it from West Earlham Library to read over the next few weeks, so I thought I would have a look.

On the first page of the book, Norm is caught trying to use his dad's wardrobe as a toilet, and things go downhill rapidly from there. The family have recently moved house, due to Norm's dad losing his job, and Norm is not coping well with the change. Unfortunately nobody seems to notice, as they are all too worried about Norm's younger brothers.

While performing stunts on his bike, Norm's best friend, Mikey, accidentally breaks a valuable tea set that used to belong to Norm's grandmother. Very generously, Mikey's father gives Norm £100 in order to replace it. However, Norm has a far better plan, and he decides to 'pimp his bike' instead...

This book is funny from the very first line. However, later in the story, Norm becomes quite a sad and lonely figure, being blackmailed by a girl from his street. You almost feel sorry for him, but because he makes such bad decisions, a lot of his problems are self-inflicted. The books is quite long, but is an absolute pleasure to read. Apparently a sequel (The World Of Norm-May Produce Gas) is due very soon! 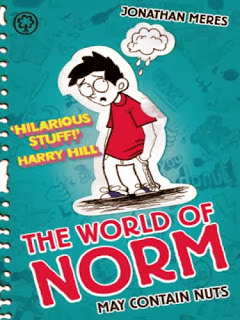