Farm Boy is the sequel to the book War Horse by Michael Morpurgo. It is all about this boy (Albert's son) who visits his grandfather. While he is there his grandfather reveals his shameful secret, which is that he cannot read or write. So, the grandson agrees to dedicate a few months to teaching his grandfather, but he has to learn fast because the boy was planning to go to Australia for a few months. After the few months had gone by he was able to do it thanks to the long hours he put in. 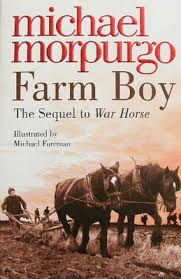 When the boy is on the way to Australia he finds a letter in his bag written by his grandfather. The letter was talking about how he won the tractor. It all started when the grandfather and his son, Albert, were riding on their beloved horses. Stopping them in their tracks was Harry Medlicott, one of the citizens in the town, telling them how useless their horses were and how they should trade them for tractors. Albert, who was very defensive towards his horses, made a bet that if the tractor won in a ploughing race Mr Medlicott would get their best hay, but if he won he would come home with the tractor. Mr Medlicott agreed to this contest as well as find it quite amusing because surely two, old horses could not beat a brand, new tractor.

When the day came Albert prepared Joey and Zoey, the two horses, and were off. At first Mr. Medlicott was racing through, but after they had their lunch break Mr Medlicott's tractor would not start. This gave Albert a great advantage. Once he was rows and rows of fields ahead the tractor started again. Despite the delay quite shortly Mr Medlicott was in the lead. Eventually Albert could carry on no longer and his father had to finish the race. Just when were all going to lose hope, the tractor got stuck in mud. Quickly the grandfather (or now father) rushed through as many rows as possible when the judge ordered the race to be stopped. They counted up the rows and Albert and his father won! Just by one row! They went home and had the tractor ever since.
Posted by WEJS at 20:27