I've only just got round to reading this, even though it won all kinds of awards when it was first published a few years ago- and I've also just found out that it is currently being turned into a 3D movie by Peter Jackson (Lord Of The Rings trilogy, King Kong). He's probably going to get The Hobbit out of the way first though.

The book is set on the Earth, several thousand years into the future. The planet has been destroyed by the 'Sixty Minute War' and has lost much of its technology. Cities such as London have been turned into 'traction cities' and must consume other cities in order to survive. The main characters of the book are a fifteen year old boy called Tom Natsworthy, who is an apprentice in the Guild Of Historians, and a orphaned girl called Hester Shaw (whose parents were murdered by the villain of the book). 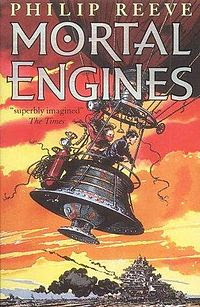 The two of them have to save the planet from the evil plots of Magnus Crome (and his numerous James Bond style henchmen). On their adventures they are captured by pirates, crushed beneath speeding villages and lost in an enormous maze of tunnels.

It's an incredibly imaginative idea and very well written. There are some very sad moments towards the end when we understand a lot more about the relationships between the main characters. The pace of the story dips slightly in the middle, but overall I really enjoyed it. Some of the wordplay and language is fantastic.

This is the first in a quartet of books that feature the same central characters. The next book is called Predator's Gold and I'll be reviewing it very soon. If you're interested, you can find out about other books by Philip Reeve at http://www.philip-reeve.com. Another book of his, Here Lies Arthur, also looks like it is definitely worth investigating (a new spin on the legend of King Arthur)- so if we've got any volunteers to try it and review it, please let me know...