Farm Boy is a story about a little boy and his Grandpa. At the back of the barn an old tractor called the Forton stood there covered in corn sacks. When the little boy visited his grandpa, he pulled the sacks off  and climbed on top of it and started to pretend to plough fields.

His Grandpa's father lived in Iddesleigh. He met his wife Maisie and then had (as you know) Grandpa. In the stables they kept two horses called Joey and Zoey. They were his pride and joy, they helped him plough everyday.

One day they had a competition against a tracter at ploughing. Half way through the race the tracter broke down and the horses were in the running to win the competition. Then it was fixed and they fell behind. Like a miracle, the tracter fell into a ditch and in no time at all the horses had won! 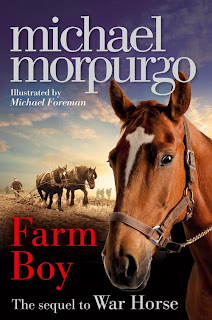